When we mention the DRC, we think about its forests, lakes, the river, but we rarely think about the sea. And yet … there is indeed the beach!

As small as it is, the DRC has a maritime territory, on the Atlantic seaboard, along 38 kilometers. This is certainly a gateway for goods that are travelling from the mouth of the river to Boma and Matadi. It is also an oil production site evidenced by sparkling lights off the coast that can be seen after nightfall. Above all, the beaches of fine sand stretch to the horizon in spectacular amber glares. 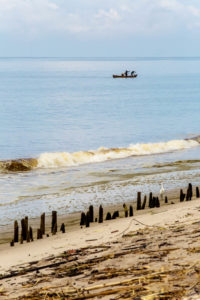 The seaside town of Moanda, near the mouth of the river, is indeed an unusual place for locals to settle down as well as for vacationers from Kinshasa or elsewhere. Moanda is characterised by these old colonial houses and new buildings perched on the edge of ochre cliffs overlooking the fury of the waves. Moanda is a city with its neighbourhoods, clusters of reeds, its festivities and its atypical lifestyle.

On the beach of La Tonde, after a dip in the ocean, one can improvise a barbecue with the local fishermen’s fresh catch of the day. Prawns, lobsters, crabs, sole and jacks are on the menu. In the evening, you can relax around one of Moanda’s legendary campfires.

For outdoor activities enthusiasts, quad rides, hikes to the Kumbi River, barracuda and grouper fishing are amongst the most popular. 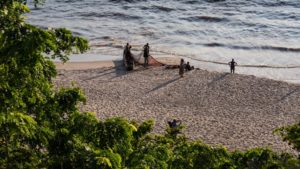 In order to enjoy the weekend pointing the tip of its nose, one can quench his thirst in one of the many “ngandas” open on the beach.

Around Moanda, explore the Mangrove Marine Park, the hippos’ island, the village of Mvuadu, Nsiamfumu’s Beach, small seaside village with its forest of coconut palms, its very old lighthouse towering off the coast, and Banana, former colonial outpost and slave market.

You who dreamt of a real relaxing vacation, do not think too far, embark on a journey the beaches of Moanda … 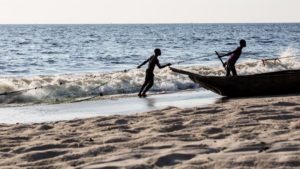 HOW TO GET THERE ?

Else, if you want to fly there, Air Tropiques or Kinavia, USD 370 + taxes.

– On the beach…
– At the New Cliff Hotel

When we think about the DRC, we do not necessarily think of the beach and yet…
Moanda, only coastal conurbation of the country with 38 km of coastline along the Atlantic coast, window on the Atlantic. It is also a seaside resort with colonial houses and new buildings. At the mouth of the Congo Riv er which empties its flow into
the ocean, 10 km wide. Accross the river, some oil extraction plants and platforms. SOCIR, oil refinery. Some other private corporations like Perenco.
The use of the port is limit ed ; too much traffic could damage the Mangrove.
Across the River, Angola and the port of So yo.

Banana is the oldest colonial outpost of Congo and a former slave market.

Beach de la Tonde which is part of the Parc des Mangroves
Sandy beaches that reflect under the sun, all day long.
The mouth between the Kumbi river and the ocean + Tonde
River Banana Point and Nsianfumu village, seaside village with its forest of coconut trees
The convent Cemetery
The Mangroves’ Marine Parc
Hippos Island
Mvuadu, and its craftsmen (baskets, spoons, masks, forks)
The old lighthouse near the village of Nsianfumu

Quad
Barracuda and Grouper Fishing
Relaxing on the sandy beaches

Meet the fishermen in the morning to buy your lunch groceries directly out of the ocean ; Sea bass, sole, captain cossas, crab, prawns, lobsters
Braai on the beach
Bonfire by night
Ngandas (sort of little huts) the weekend, right on the beach.
Lots of bars energize the city at night.