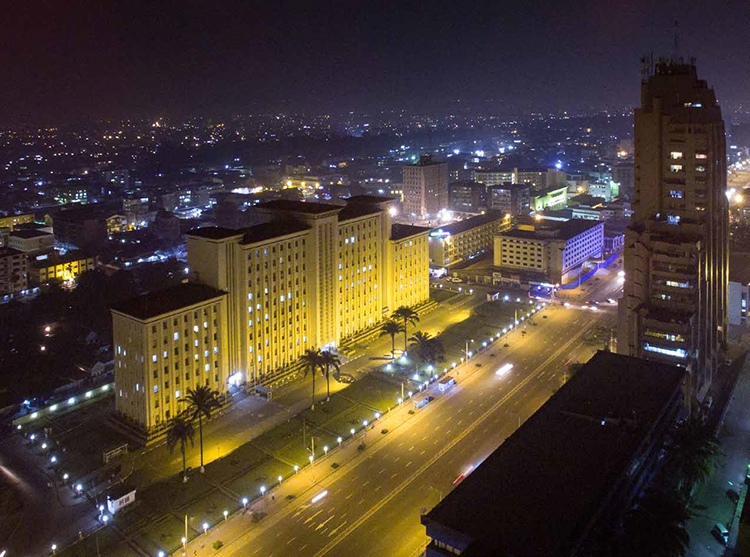 Kinshasa. Capital of the Democratic Republic of Congo. A unique African metropolis. Young, violent, insolent, insomniac, bewitching. If you resist her and do not let yourself get carried away, she will anyway never leave you indifferent.

THE FIRST FRANCOPHONE CITY IN THE WORLD Situated on the edge of the equatorial forest on the south bank of the Congo River, it is the third most populous African city after Cairo and Lagos, and the first French-speaking city in the world with a population estimated at between ten and twelve million inhabitants. Originally a merchandise warehouse on the Congo River, Kinshasa was founded in 1881 by the Anglo-American explorer Sir Henry Stanley, who gave it the name of Leopoldville, named after Leopold II, king of the Belgians. Formerly inhabited by Teke fishermen under the authority of Chief Ngaliema. the city was extending over thirty kilometers from east to west and more than fifteen kilometers from north to south. In 1966, the city was renamed Kinshasa, named after a village in Bas-Congo.

KINSHASA HAS MANY FACES BUT IS ALSO A LAND OF REFUGE

Kinshasa is the economic, political and cultural heart of the country, and the seat of important international institutions. It is a city of contrasts, multicultural in essence, with representatives of the 450 Congolese ethnic groups, but has also welcomed many foreign communities in the past. The river Congo and its long, powerful and majestic course invites itself in the life of the capital’s inhabitants. A Sunday spent on the sand banks followed by a cruise on the Majestic River, are among the must-see escapades. Today, the beautiful Kinshasa proudly defends its title of most exuberant capital of Central Africa.

A GREEN LUNG IN THE HEART OF THE CITY, A PARADISE FOR PROTECTED SPECIES

Noisy and anarchic, colourful and fragrant, lively but also in full effervescence, the capital of the DRC hosts in its heart one of the most beautiful golf courses of Central Africa.
A green lung in the heart of a city that today has about eight million inhabitants. Its magnificent course extends over forty-nine acres through lush vegetation is an eighteen very sporty holes famous for its innumerable water hazards. And a few crocodiles… This green oasis which shelters a fauna and a flora of a rare wealth is also a sanctuary for a great variety of birds. Particularly Jaco parrots who are a protected species.
The Golf Club of Kinshasa welcomes an International Open in May every year. An unmissable sporting event that has become the annual rendezvous of golfers from Africa and the rest of the world. Kinshasa is constantly rediscovered through the legendary hospitality of the Kinois. On the front side: the days between business meetings in the air-conditioned offices of modern buildings, the skillful management of one’s timing in an attempt to escape the terrible traffic congestion that takes part in the capital city’s sulphurous reputation. On the flip side, Kinshasa’s nights only have one principle: the discovery of the new high places. A perpetual renewal for any warned “night setter”. In Kinshasa, everybody knows that even if Abidjan is sweet, at night all cats are grey!
Photos Gwenn Dubourthoumieu