DÉCONNEXION: WHEN CONTEMPORARY ART BRINGS CONNECTED OBJECTS BACK TO LIFE

At only 24 years old, the Ivorian visual artist, Monou Désiré Koffi, is positioning himself as one of the hopes of contemporary art in Côte d’Ivoire. He is a master in the art of electronic waste recycling, which he collects in the streets of Koumassi, a popular district in the noisy and effervescent city of Abidjan, where he lives.

In June and July 2019, the Galerie Parisienne Art-Z hosted the first solo exhibition of this young artist whose works can already be found in private collections.

WHO IS MONOU DESIRÉ KOFFI?

Barely out of the Beaux-Arts, the international art scene already opened its doors wide to him. Collective exhibitions in Ivory Coast (his country), Morocco and most recently in Belgium; at the age of 24, the artist is counting among the most important figures of contemporary Ivorian painting.

Born on October 28, 1994 in the city of Buyo (in the South-West of Ivory Coast), Mounou Désiré Koffi has always had a path all traced in the world of art. Passionate about drawing since childhood, his vocation asserts itself very early when he wins a competition while he is still in primary school. His life path is already set. After graduating from the Artistic High School (LEA) in Abidjan, where he graduated from his class, he joined Beaux-Arts in the same city to obtain a bachelor’s degree.

Mounou Désiré makes a happy marriage between impressionism and figurative art. He asserts his own style by pushing the boundaries of painting with a touch as seductive as unpredictable. This is because the artist has decided to give a second life to mobile phones users. He uses keyboards and screens to draw human silhouettes, which he inserts into realistic and colourful urban settings. The resolutely ecological approach is nonetheless aesthetic, offering original reliefs and a look quite pleasant on the streets of Dakar or Adjamé, a commercial district in Abidjan.

The works of Mounou Désiré Koffi have won the hearts of many amateurs, but also knowledgeable collectors who already see the bright future that is emerging for the young painter.

A CONTEMPORARY WHO IS IN TUNE WITH HIS TIME

Mounou Désiré Koffi explains: ”My mission is to give e-waste a second life”. Mounou’s point of view is not Manichean. It does not automatically denounce. He observes and opens the debate. The distance between people increases as technology evolves. Like a metonymy, he uses mobile phone keyboards to express the concept of technological evolution. Men are a little like machines that unconsciously disconnect themselves, little by little, from their share of humanity.

The relief applied to the paintings of Mounou has from then on of interest in the form but also and especially in the content. With his keyboards, he brings an aesthetic relief to these landscapes, and then raises the issues of our time. He proposes a recycling technique for electronic waste, a real headache for manufacturers and a scourge for humanity. Resolutely contemporary, wise, and attentive to his time, his work is not frozen. Hence, the transition between the keyboard and the touch screens that appear in his paintings. 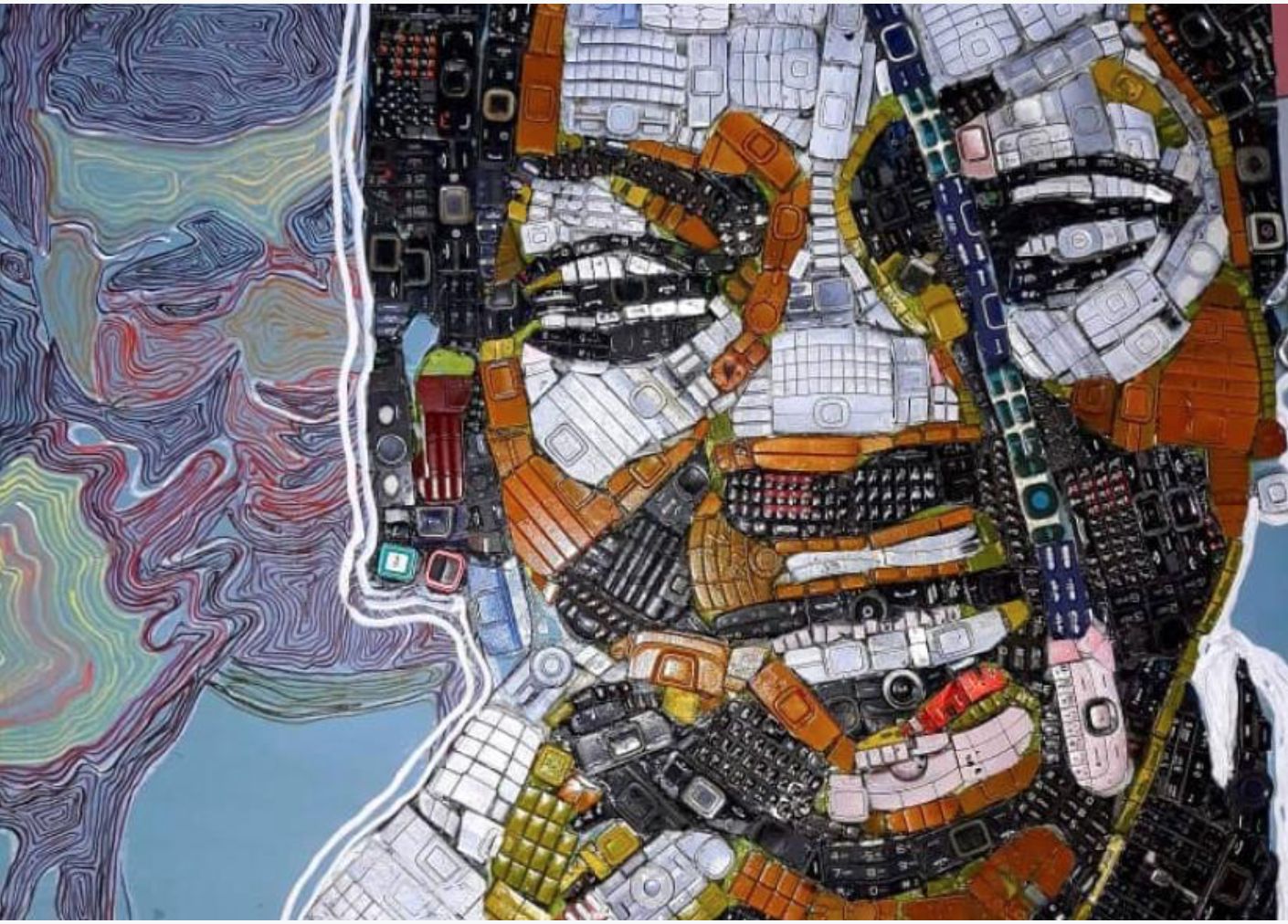 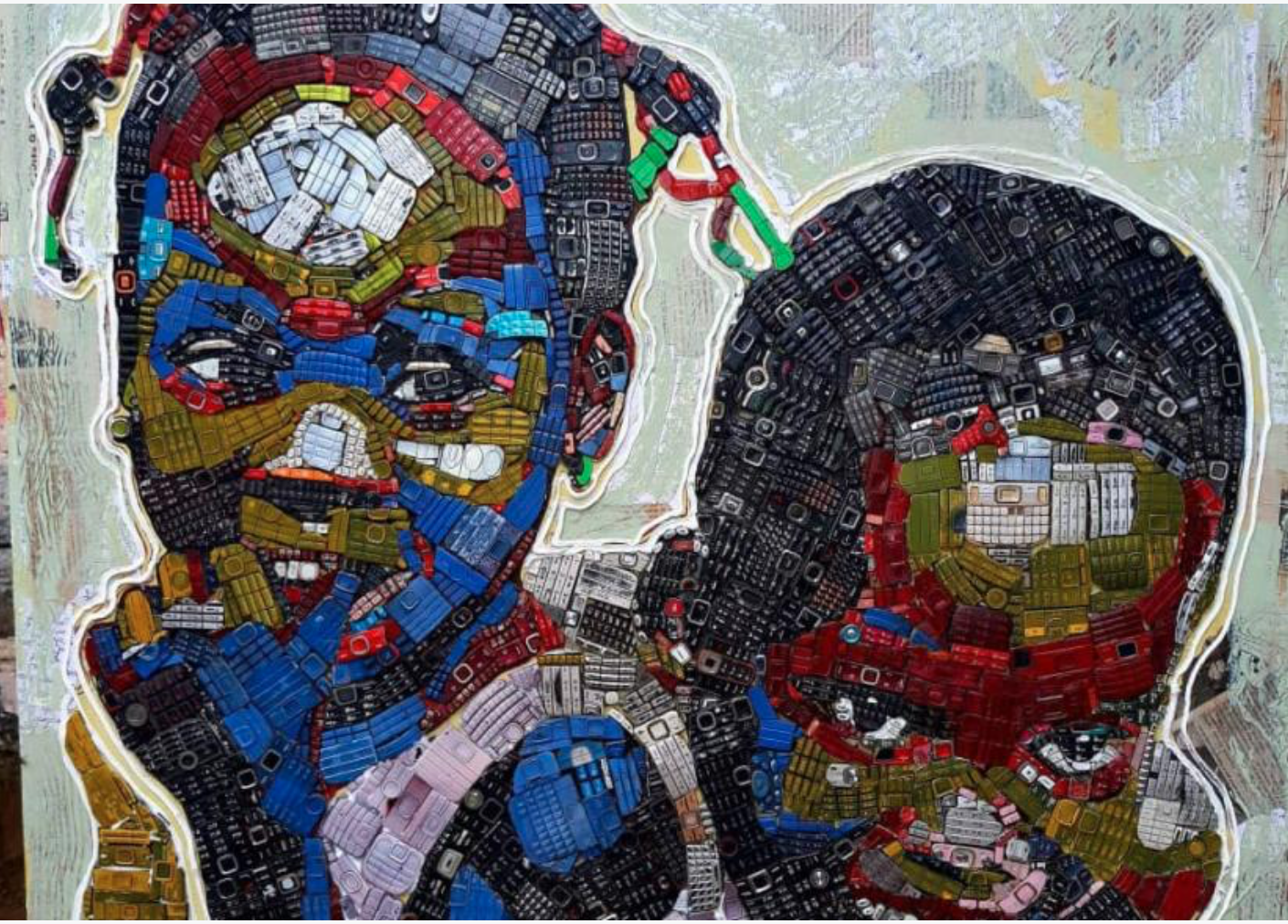 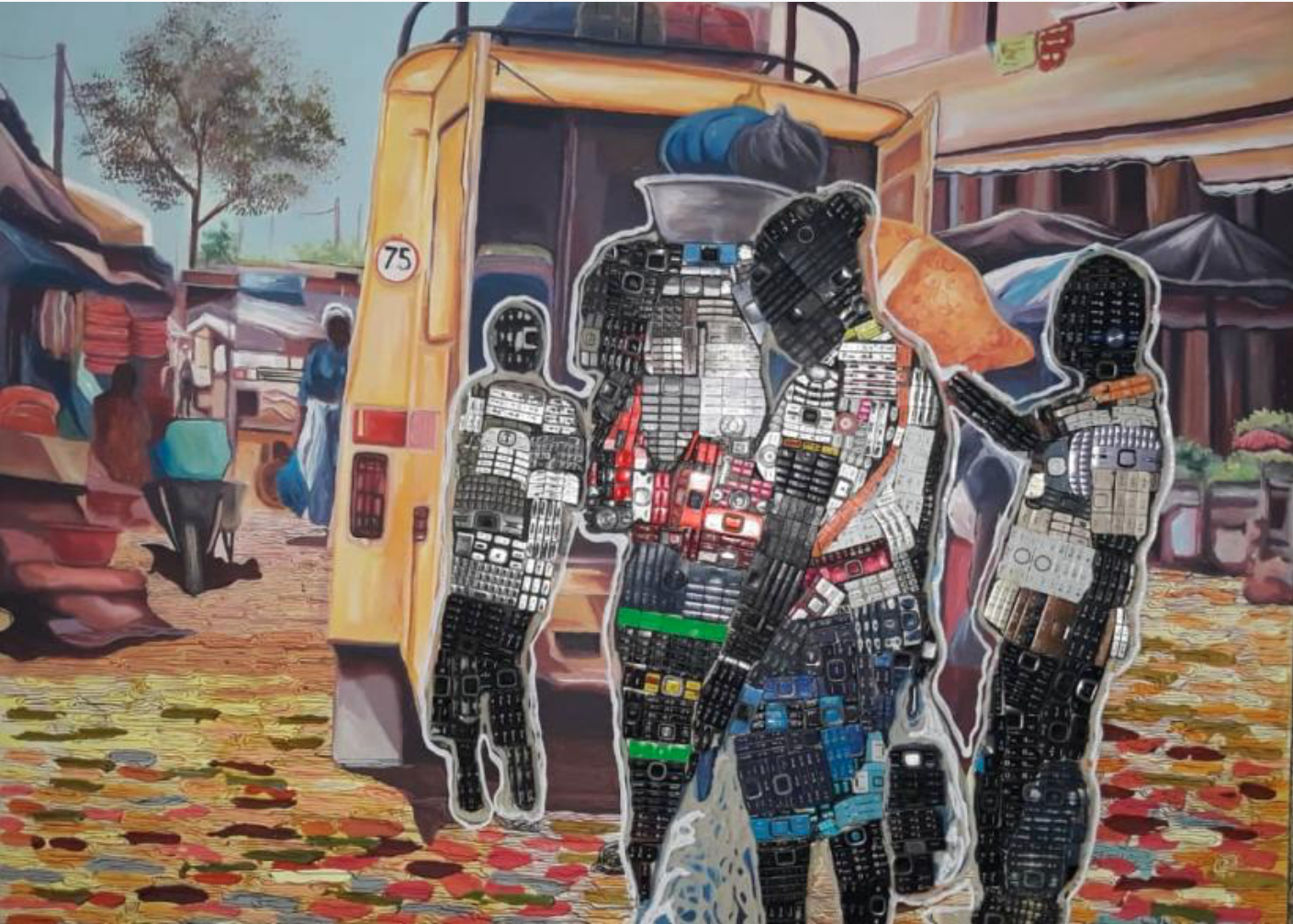 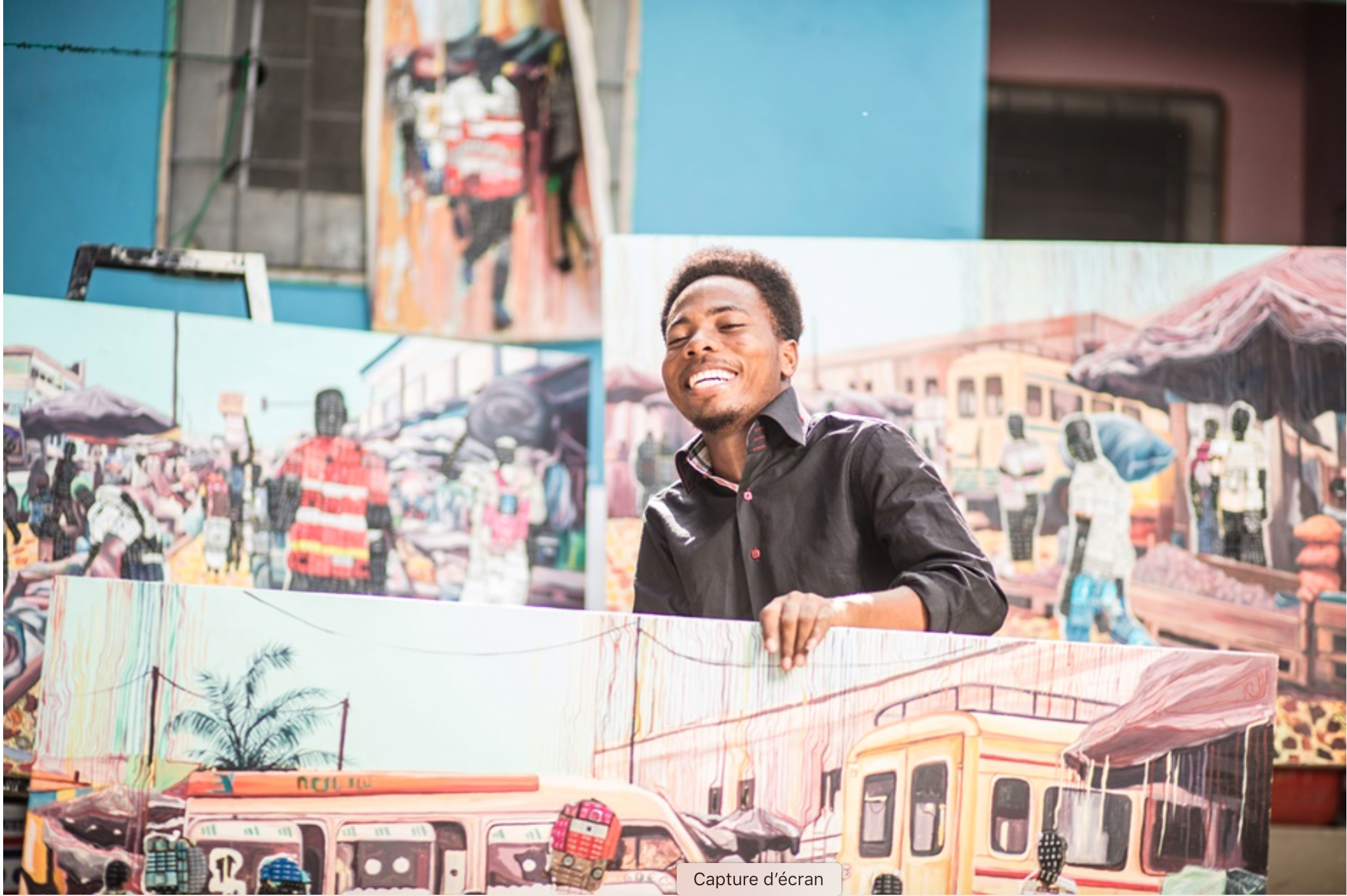 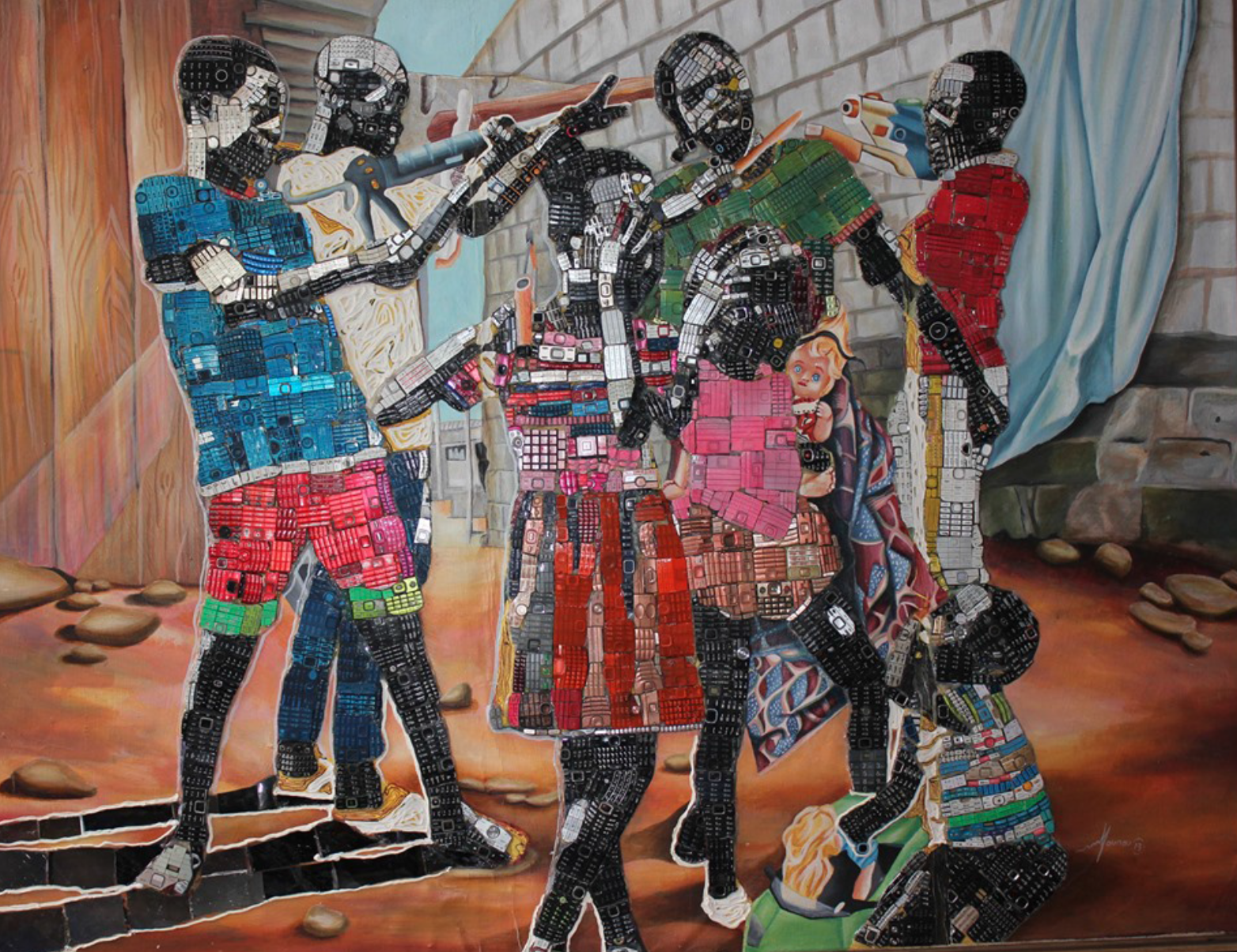 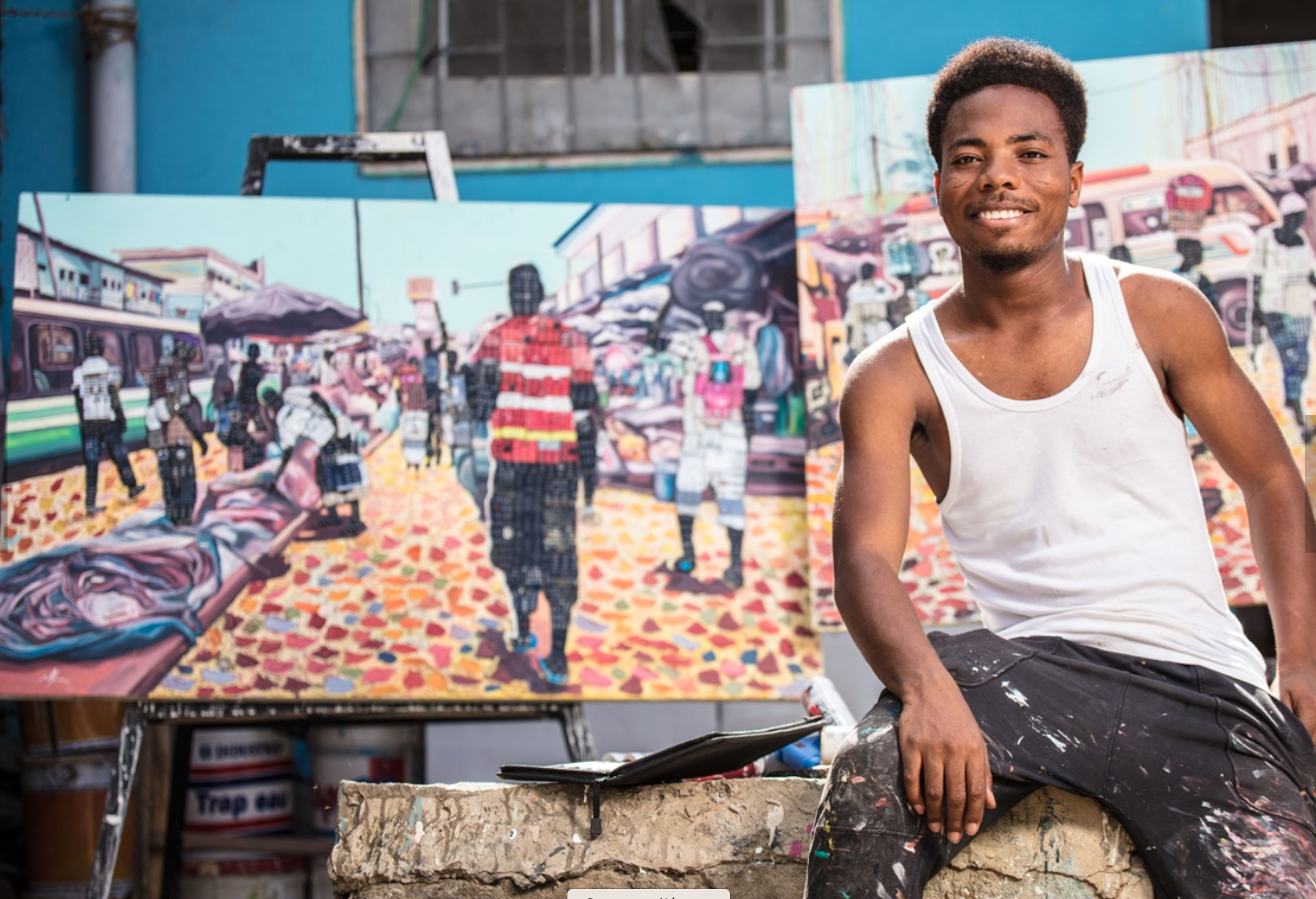 [Montrer sous forme de vignettes]
DÉCONNEXION invites us to a simple awareness of the impact of our “hyper-connectivity” to smartphones. A complete questioning on the drifts of progress and social behaviour. Who is the slave of whom? Who influences whom? A deep disconnection from the frenzy of daily life for a true introspective journey.