Meeting the people of the Rift Valley 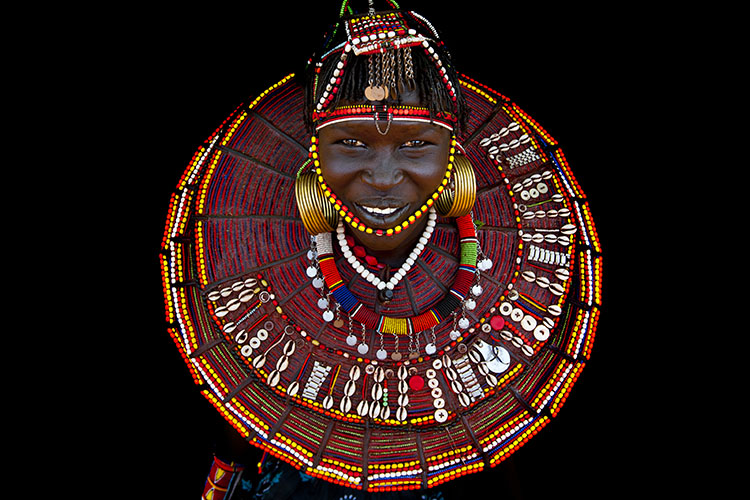 2005. On the way to the Serengeti, I stumbled upon a group of Maasai along the road. I was intrigued by their slender silhouette, their beauty and colours. A few months later, I decided to spend a week in one of their villages.

As the most famous tribe of East Africa, the Maasai play the role of ambassadors of the people of the Rift Valley. They are distinguished by refined body art, decorated with many jewels, red or blue blankets according to the clans. As for the Moranes, term which designates an age group for men between the end of puberty up to the age of 30, they sometimes let their hair grow, cover their bodies with red ochre, and wear long braids coated with butter and ochre. 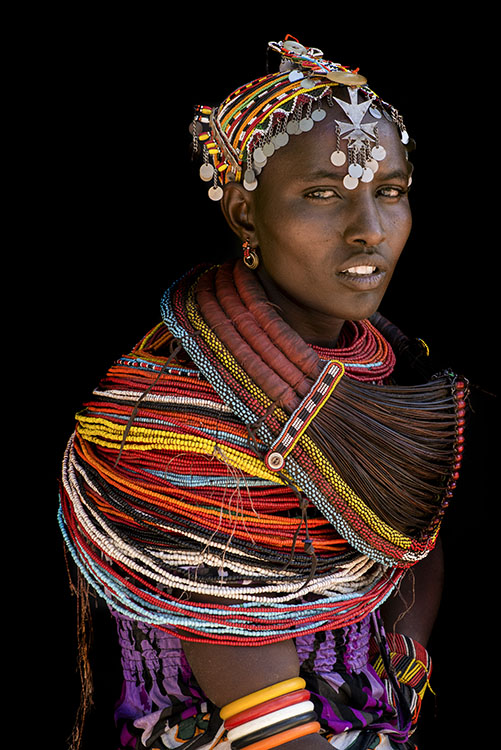 In addition to the Maasai, the Great Valley of the African Rift, also known as the cradle of mankind, in reality brings together a unique ethnic diversity, all in an extraordinary natural setting: the great Rift, which shears on nearly 6000 kilometres the entire eastern part of the black continent.

Their art is directly influenced by the many migrations they have experienced. While the sedentary peoples of West Africa have developed architectural arts, furniture and rituals based on statuary and masks, the pastoral peoples of the Rift, prevented by their ceaseless mobility from developing a heavy and cumbersome art, have made their bodies the principal field of expression of their artistic sensibility. Scarification, tattoos and lobes or lips stretched out and adorned with discs, jewellery of infinite shapes and colours, clothes of everyday or for ceremonial use, ornamented with pearls and cowry shells, symbol of fertility, body paintings or even very sophisticated headdresses and clay helmets…

Beyond this generality, it is the identity of each tribe that strikes. Each tribe has its own unique dress codes, jewellery and distinctive body art that identifies it in the blink of an eye. An approach so foreign to our globalised Western world.

Among all these people, it is the people of the Omo who have attracted the most attention and among them, the Mursi and Surmas, the most spectacular with labrets (labial plates) adorning the lips of women. If for these tribes scarification is common, clothing art is minimal.

Yet, other ethnic groups are equally worthy of interest : for instance the Karo and their clay helmets, or the Nyangatom, whose women elegantly wear goatskin dresses embellished with beads forming geometric patterns that the greatest Italian couturiers themselves would admire. Furthermore, some similarities between certain ethnic groups are so striking that it is hard to imagine that they never met before. This is the case for the Hamers, whose women cover themselves with ochre soil mixed with vegetable fat in the same way as the Himbas women of Namibia.
Further south, crossing the Kenyan border along Lake Turkana, encounters are just as exciting.
The Turkana, in particular, live in difficult climatic conditions, which explains their harshness at the first encounter. Their women wear particular collars that weigh several kilograms and which represent their identity mark. Similalrly, different tribes display their own unique identity marks such as the Rendille with their leather busts, the Pokot’s huge circular and colourful necklaces or the Samburus, whose famous Moranes, wear helmets, bracelets and clothes of rare elegance. 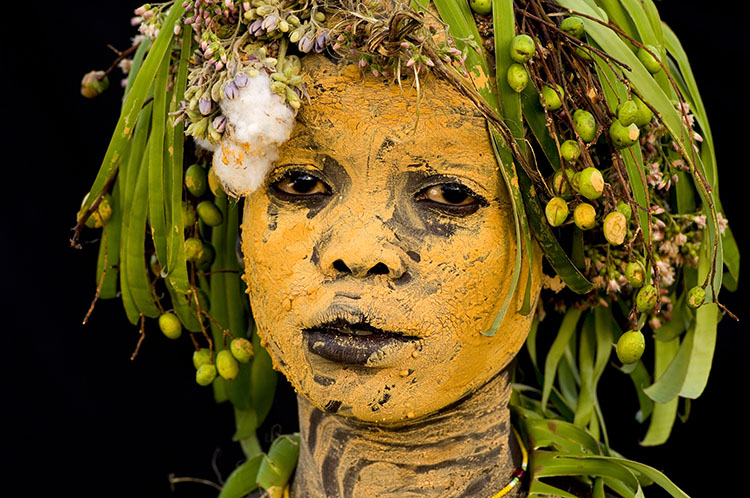 It is important not to forget people who are not as widely known such as the Hadzabe or Datoga tribes from the outskirts of Lake Eyasi in Tanzania. The Hadzabe are hunter-gatherers who place great importance on clothing traditions because of their frequent travels in search of game meat, notably wearing imposing headdresses made of baboon furs. The Datoga, on the other hand, excel in making bracelets and copper necklaces of impressive beauty by melting old padlocks and other found objects. This quick overview would be incomplete without a return to the extreme northern tip of the Rift near the Gulf of Aden. 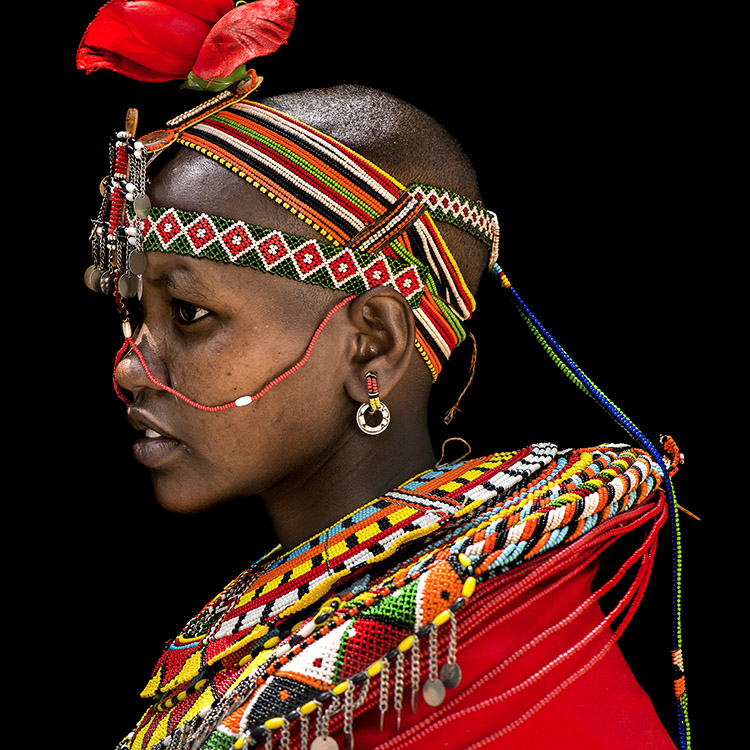 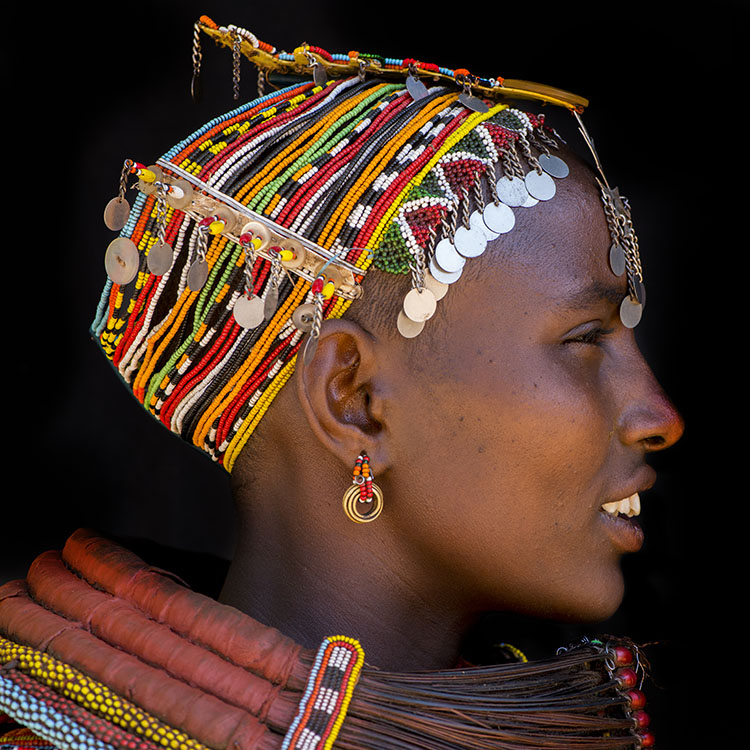 First, there are the Afar people, who live in the area called the Afar Triangle, where the three faults of the Gulf of Aden / Red Sea / African Rift meet. Then comes the peoples of Tigray and Shoah, settled on the high plateaus of Abyssinia and whose history goes back to more than 3000 years, with the foundation of the first empire by Menelik I, son of the queen of Sheba and King Solomon… Christianized from the beginning of the IVth, these people’s culture is maximized during the times of great Orthodox celebrations in the troglodytic churches of the Tigray or in historic towns such as Lalibela, famous for its churches in the form of crosses carved directly into the ground.

I immortalized these fascinating people and their extreme diversity in a book, « Portraits of the Rift », following a similar approach to that of the great photographer Sebastiao Salgado, for whom ‘everywhere people are beautiful, everywhere they want to be portrayed in a dignifying way’. This book is a testimony, because times and customs are changing very rapidly and the freedom and autonomy of these peoples tend to diminish in the face of political pressures and the influence of tourism. This often results in the gradual loss of ancestral traditions. What will become of these people and their customs in five, ten or twenty years’ time?

Many agencies now organize trips to meet various tribes. But in order to be able to experience these encounters in all authenticity and with the necessary sobriety, a name is required. It is that of Jean-Yves Marteau, a Frenchman living in Nairobi, a great specialist in trekking, who has travelled through these regions from North to South.