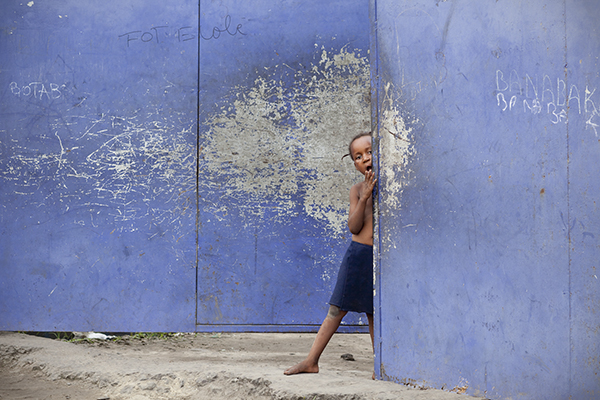 The meeting between these two districts between Kinshasa in the Democratic Republic of Congo and Brussels can only be explosive. Because beyond the dialogue between the two shores, it is indeed a resonance, the identity and culture of the same people unites in spite of itself through the history between the DRC and Belgium.

“Matonge Kinshasa? I live there, I was born there, it’s me if I can say so, she speaks to my heart. Deep down, the noises and smell of this city shame me, the noises especially, it’s strong Matonge”. Freddy Tshimba, one of the most renowned Congolese visual artists, spoke to us in these terms about his neighbourhood. Accustomed for several years to commuting between the two Matonge and linked to the one in Brussels by his sculptor”’ beyond hope”.

Matonge is a working-class district in the north of the commune of Kalumu in Kinshasa in the DRC. Located between the Victoire district and the Tata Raphaël Stadium, it is one of the main places of Kinshasa’s nightlife, bringing together bars and restaurants. There are also many music recording studios. It is best known as the cultural crossroads of Congolese music, from which groups such as Viva La Musica by Congolese star Papa Wemba have emerged, launching a few musical artists such as Koffi Olomide, King Kester Emeneya and many others.
In Belgium, In the commune of Ixelles, beats the Congolese heart of the city: Matonge. This name makes Kinshasa pulsate in the veins of the inhabitants of Brussels. It is there, in the middle of the European capital that, since the 1960s, the Congolese community has found itself among wax shops, restaurants, rumba clubs and African hairdressers.
The object of all the curiosities, the district has long had a reputation as a “red-light district”. However, in recent years, its central location, very close to the European institutions, has whetted real estate appetites. But Matonge resists, proud of its culture and diversity. Guided tours are organized to discover its African history, some of which are specifically oriented towards the (de)-colonial question.
This question is increasingly emerging in Brussels, a city that owes its vast parks, its majestic Avenue Louise or its Tervuren Museum to Leopold II, “king builder”, and a highly contested figure of Belgian colonization in Congo. Belgian-Congolese civil society then invited itself into the debate, and claimed its place in the national narrative, but also in museums.
The dusty Royal Museum of Central Africa, long presented as the last museum of the European Colonies, has also undergone a makeover, for example, by storing in the cellar its emblematic “Leopard Man”, a racist and outdated representation of the black man. Among the Congolese in Belgium, the question of identity remains and the ghosts of the past are never far away.

The encounter with Matonge Kinshasa can only be explosive as the sounds, colours, smells and crowd movements were strong and intense. If you haven’t had the chance to go to the DRC then head for Brussels and its Congolese district Matonge. To visit and consume without moderation