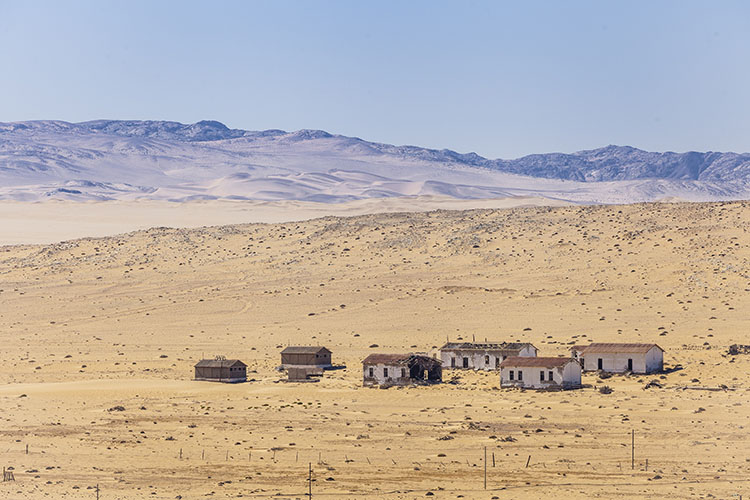 “The sun is still high in the sky, my body bends under the stifling heat. In front of me, another hundred meters of railway to inspect. A stone more glittering than the others then catches my eye.
My name is Zacharias Lewala and I could never imagine for a moment that this discovery would change the destiny of an entire region. ”

In the midst of the dry and barren lands of the vast Namib desert lie the foundations of a once flamboyant city.
On the soft curves of the dunes emerge the rough vestiges of Kolmanskop, a ghost town once known the diamond capital of the world.
Today, it seems difficult to imagine that these dilapidated barracks housed one of the most prosperous communities in the world.
By settling down a few kilometers away from Lüderitz at the beginning of the last century, the first inhabitants of Kolmanskop did not suspect the wealth that lay under their feet.
Indeed, bending down was enough to pick up the diamonds by hand, on the ground.
This is what happened on April 8, 1908 to Zacharias Lewala. 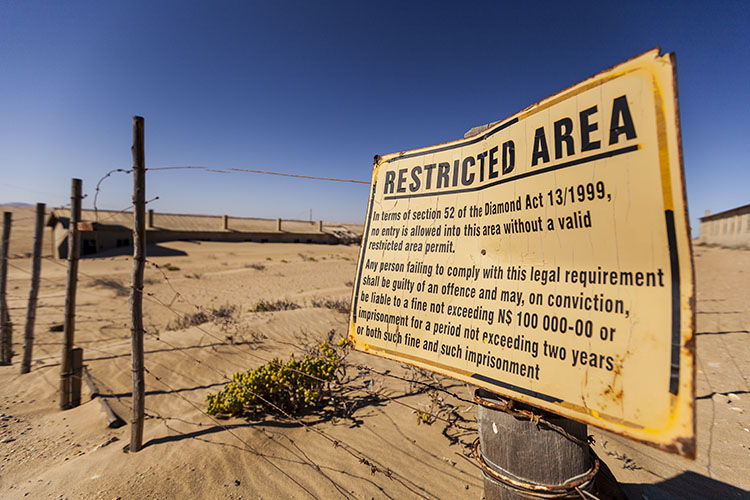 Before the diamond fever, Kolmanskop was an insignificant little town. It was so insignificant that the origin of his name came from a simple carrier – Johnny Coleman – who, during a sandstorm, abandoned his plow on the neighboring dune. But everything changes the day Zacharias Lewala discovered, for the first time, the famous gemstone. Convinced that this “may well be a diamond”, he showed it to his supervisor, the German railway inspector August Stauch, who hastened to have the “rock” inspected. Lewala was right, it was indeed a diamond. Although the event was meant to remain a well-kept secret, the news soon spread like a wildfire, bringing hundreds of prospectors to converge towards Kolmanskop.

The city then developed rapidly, becoming a hotspot for this diamond rush. Large and elegant houses were built, with an impressive array of amenities: a gym, a casino, a hospital with the first X-ray center in the southern hemisphere, an ice factory and even a ballroom that welcomed some of the most famous European operas. 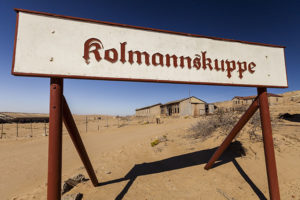 “Thousands of people flocked in and the economy of the city simply boomed. Legend has it that you could even find diamonds at night, thanks to the moonlight”, confessed Daniella, one of the managers of the Kolmanskop site. “There was a swimming pool. No one would expect to find a pool in the middle of the desert. They also imported champagne from France”, she continues.
At the height of luxury, the council of the city even appointed a team of sweepers who cleared the sandy streets every day.

Yet, in the 1930s, the wealth of the city was already largely undermined. When even larger deposits were found 270 kilometers south of the border between Namibia and South Africa, many miners decided to leave the city. Diamond production in Kolmanskop, which had reached its peak in the early 1920s, declined until it was finally stopped in 1954. The last families left the city in 1956: that year, the German enclave was ultimately left as a prey to the hungry desert.

Today, the Kolmanskop site is located in the heart of a protected area controlled by Namdeb Diamond Corporation, a company owned by De Beers – one of South Africa’s largest diamond conglomerates – and the Namibian government. Access to the site for a visit can however be obtained after applying for a permit. The ghost town is considered one of the most unusual and graphic tourist sites in the world.
Kolmanskop is also the ultimate destination for photographers. These places, once filled with their own emptiness, happen to reveal an irresistible poetry that is often sublimed by photographers.

Visiting Kolmanskop offers a mysterious experience, a vision of the power of the elements and the ephemeral nature of life. Like a strange reminder of a moment in time.
Just like other sites such as the Machu Picchu or the Pyramids of Giza, Kolmanskop is a reflection of the power of Nature.
The one that evolves tirelessly when great civilizations are extinguished.
The one that offers, the one that resumes. The one that imposes its time.
The one that slips into all spaces and absorbs brick, metal and plaster while fiercely taking back its rights.
A harmony to be found, on the vestiges of the past…

Go
Flying to Kolmanskop, Air Namibia offers flights from Windhoek, capital of Namibia, to Lüderitz. It is important to check the timetable in advance, as there are only two or three flights a week.
By car, Luderitz is easy to find via the B4 highway.
Keep in mind that if you drive through the Namib Desert, the distances between cities are important. Allow at least a 5 to 6 hours long drive between Windhoek and Luderitz.

Stay
In Kolmanskop you will not find any accommodation in the village but many excellent options in Luderitz. I opted for a B&B, but there are also a few very good seaside hotels.

Bring
In addition to your camera gear, there are a few other essential items to pack in your travel bag:
• The permit for visiting the village of Kolmanskop – very important and do not forget to leave it on the front seat of your car.
• Some water. Remember, you are in the middle of the desert, you can get dehydrated very quickly.
• A light scarf. If there is wind, a scarf is great to protect your eyes and mouth from the desert sand. From my experience, you do not want to be there if it’s too windy.

Wear
• First and foremost – a good pair of closed shoes. There is a lot of sharp debris in the sand such as broken glass or pieces of metal.
• Think of light, but warm clothing. Once the sun sets, the temperatures drop drastically.
• Hat, sunglasses and sunscreen to protect yourself from the sun.