Kingdom of Bantè, the legend 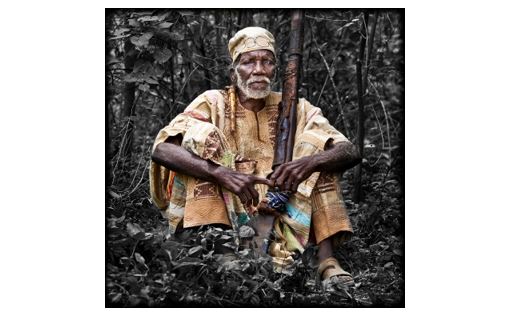 Fourteenth century. Bantè Kingdom is threatened by a pair of eagles that prey on newborns. A Nagô hunter delivers the village.

Obiti, the hero, now King protector, moved to Bantè. Thus was born, according to oral tradition, the Nâgo dynasty of the sacred Forest. Composed of twenty-seven villages and administered by its tenth King Ade-Fouiloutou Laourou, the kingdom survived the vicissitudes of history. Very isolated, Bantè maintains a unique traditional heritage, beautifully preserved with multiple influences: Nigeria, Burkina-Faso, Niger and Mali.

The hunt begins with praise and is punctuated by spiritual songs. In addition to their guns, hunters wear a talisman and an outfit that gives them a power of invisibility.

Hunters are the custodians of a rich tradition that is closely linked to the forest. They possess an exceptional knowledge about herbal treatment.

The Nago community of Bantè practices Voodoo. Ogou, god of iron, plays a major role is this belief. It is he art of divination  that designates and gives to a Head Hunter the power of its predecessor, not the King or any other authority.

Text and photos by Jean-Dominique Burton