In the Democratic Republic of Congo, Mangroves, an ecosystem to preserve 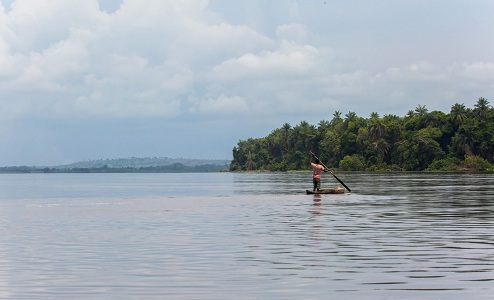 Unique in DRC, the mangrove located at the mouth of the Congo River constitutes an ecosystem with a very particular plant biotope. With waters up to 14 metres deep, it offers a variegated flora, varying according to the nature of the water, sometimes fresh, sometimes salty, sometimes mixed.

Scattered with innumerable islets, it is dotted with mangroves with roots that are both aerial and at the same time submerged, with the appearance of large waders. Endemic plants such as raffia palms, pandanus, rhizophoras, baobabs, and toothed palms are omnipresent along its banks. Of unsuspected importance, these plants ensure the stability of the shoreline offering protection against erosion.

In its waters there are rather discreet manatees, further upstream, hippopotamuses that are barely seen, but also crocodiles, varans, snakes, amphibious fish, crabs, cercopithecus and seven species of turtles. Along the meanders, a multitude of birds (egrets, vultures, parrots, grey herons) fly from one tree to another for the greatest pleasure of day sailors.

Rich in freshwater shrimp and clams, mangrove waters provide fishermen with a significant source of food and income. Experienced divers go freediving to a depth of 6 or 7 metres to bring the precious crustaceans back into their canoes. A practice received from their ancestors, they initiate the youngest from an early age in order to ensure the continuity of their activity. It is not uncommon to meet a mother with her child in a canoe surrounded by this priceless sesame.

As you will have understood, mangroves are full of precious resources and everything is done to welcome visitors. A boat trip, a river trip up to the town of Boma to meet hippopotamuses, sunrise in the middle of the parrot island lake, crossing the island of Bulambemba occupied by an incalculable number of creatures with a curious, perennial and furtive air, a night descent on the beach to meet turtles are on the programme.

For those who wish to immerse themselves more in the unique atmosphere of the mangroves, Kimwabi, the island strewn with clam shells and bright white, welcomes visitors for one or more nights in the most local colors. And for the more adventurous, a dive with local fishermen is also possible.

However attractive and attractive it may be, the unique mangrove biotope is an ecosystem in constant danger. Threatened by the deforestation caused by the anarchic cutting of wood, the invasion of the coast by the construction of new houses, the poaching of olive-turtles, the pollution due to the ships which circulate in the mouth, the mangrove fights to ensure its perenniality. It is therefore a gentle balance to be found and maintained. A showcase to preserve. Welcome.

– Bulambemba Island, former site of the 40-45 war, with its viewpoint, its cannon and its former penitentiary centre. A crab colony has taken up residence on its banks.

– the island of Kimuabi occupied by the Assolongo fishermen from Angola who specialise in clam and cossa fishing, whose soil and that of other adjacent islands are strewn with thousands of empty shells thrown away after consumption.

– the floating village of Kizunga Manianga, village of the region’s traditional chief.

Either by plane with Air Tropiques or Kinavia, count USD 370 + round-trip taxes.

– Before leaving in the PMM, overnight at the Convent of the Sisters of Charity: between USD 50 and USD 100;
– Night spent in the PMM (huts in Kimuabi village): USD 10 per person + USD 5 for breakfast and USD 25 per meal.

Admission to the PMM

Per day in the park:
– USD 25 for adults and USD 15 for children over six;
– boat rental with variable price depending on the tour chosen and the duration of the visit;
– Possibility of pick-up by boat from Boma.