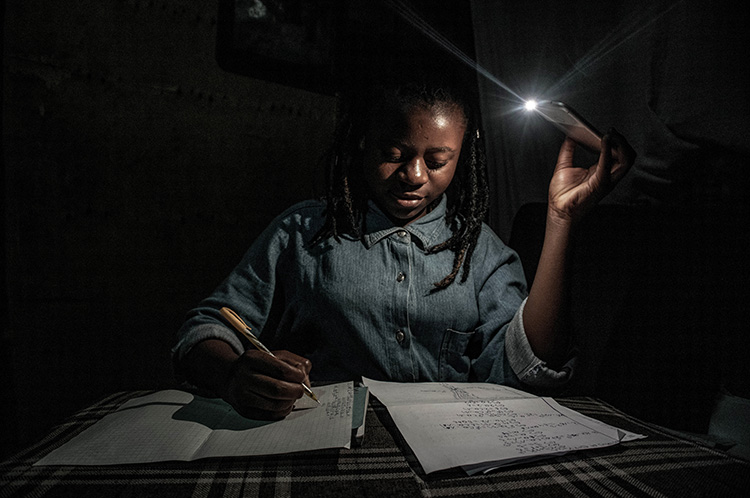 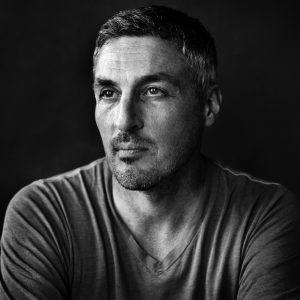 Finbarr O’Reilly, a freelance photographer and multimedia journalist, is the author of a memoir published by Penguin Random House in 2017: Shooting Ghosts, A U.S. Marine, a Combat Photographer, and Their Journey Back from War.
Chosen to produce the photos for the exhibition “Crossroads Ethiopia” around the 2019 Nobel Peace Prize winner Abiy Ahmed Ali, his work is frequently published in the New York Times and has won him numerous awards, including first prize in the Portraits category at the World Press Photo Awards in 2019. He was also the winner of the World Press Photo of the Year in 2006. Finbarr O’Reilly spent 12 years in West
and Central Africa and covered 20 years of conflict in the Democratic Republic of Congo, Chad, Sudan, Afghanistan, Libya and Gaza. 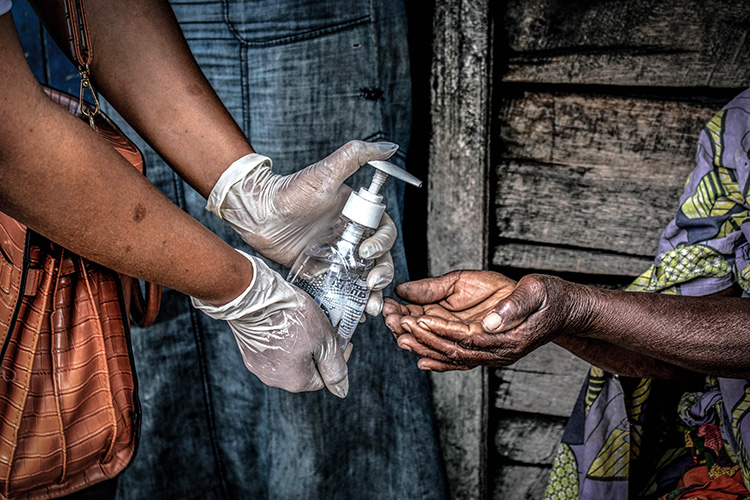 In early April, three days after the first case of COVID-19 was confirmed in Congo’s eastern city of Goma, a woman is given disinfectant in the city’s Katoyi neighbourhood, where residents do not have easy access to water. Arlette Bashizi for Fondation Carmignac.

A Harvard, Yale and Columbia University scholarship holder, he is a trustee of the ACOS Alliance, a group of media organisations dedicated to the protection of independent and local journalists around the world. He returns regularly to the DRC and Rwanda, where he lived between 2001 and 2004. In 2019, he spent months documenting the second largest Ebola outbreak from the inside and producing Ebola in Congo for PBS. The documentary shows health workers risking their lives to fight the virus in a region devastated by decades of conflict.
Dublin-based Finbarr O’Reilly is a key witness to Under Fire: Journalists in Combat, a documentary on the psychological damage of war journalism, which was nominated for an Oscar in 2012 and won a Peabody Award in 2013. 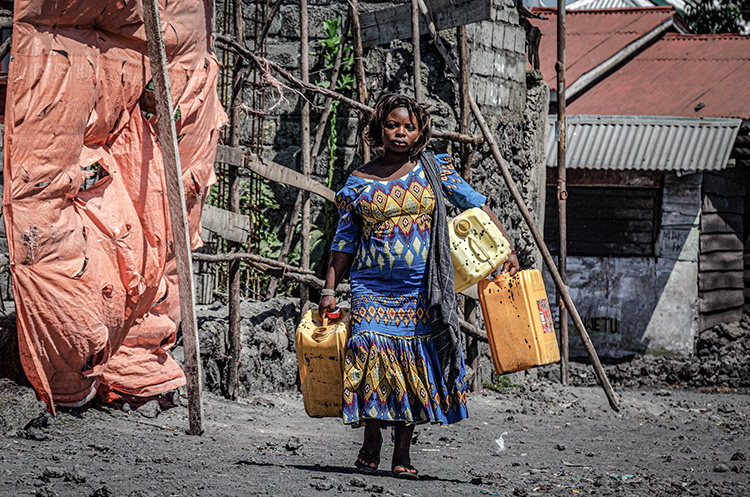 A woman carries water containers in Goma, the capital of eastern Congo’s North Kivu Province last month. Congo’s state water provider REGIDESO promised free access to water at the start of the coronavirus outbreak in March, but with few people connected to water mains and poor service for those who are, the lack of water during the pandemic has made it difficult to adhere to health advisories and hygiene measures and has led to protests in Goma, which sits on the shores of Lake Kivu. Arlette Bashizi for Fondation Carmignac.

For Hamaji Magazine, he agreed to answer a few questions

Finbarr O’Reilly, this year the 11th Carmignac Prize for photojournalism has selected you for your project “After the Flood”. The health crisis by the virus inspired you to create the online collaborative dedicated to the Democratic Republic of Congo (DRC) “Congo in Conversation”. Tell us about this project.

Each year the Carmignac Foundation gives a grant to a few photojournalists to prepare a major report of about six months, the production of an exhibition and a large book on a topic. Last year it was the Amazon, the year before that it was the Arctic. In 2020, the focus was on Congo. And I was the winner of this photojournalism scholarship.
From the beginning, I was very aware of narratives that come out of Africa in general, and more specifically from the Congo. Those are shaped by foreigners and white photographers; and I wanted to find a way to collaborate with Congolese photojournalists, to give these narratives a perspective that is not only foreign, but also Congolese, in a way that is a little different from what we usually see about the Congo. So that was what I wanted to apply to this project, but it was impossible for me to continue my reporting on the ground because of the state of health emergency decreed by the head of state. 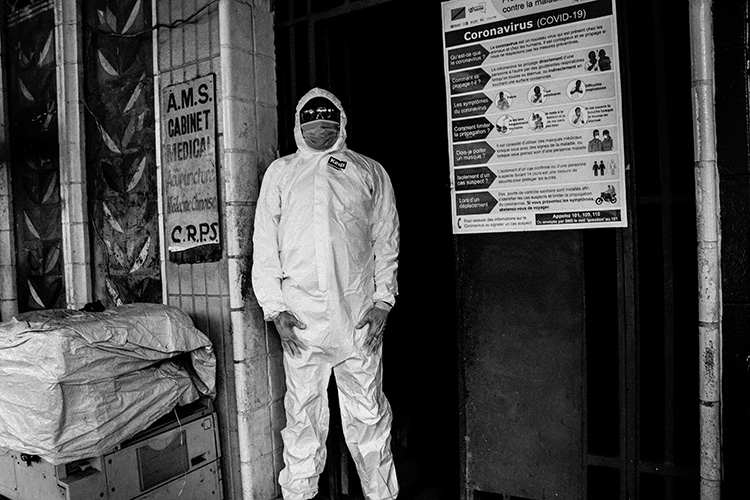 A member of the COVID-19 response wears protective equipment at the entrance to a building in the Gombe commune of Congo’s Capital, Kinshasa, in mid-March, 2020. The responders were at the main entrance of the building to raise awareness among apartment residents about social distancing and to take the temperature of anyone entering or leaving the building, where there are around 75 families and offices. Justin Makangara/Fondation Carmignac

In March, the DRC was forced to close its borders because of the coronavirus epidemic. This situation prevented you from carrying out your report in the country. Therefore, it seems to us that the title “Congo in Conversation” takes all its meaning, as a conversation, a dialogue between all. Under what circumstances did you decide to collaborate with local journalists and photographers ?

With the closing of borders in Africa and around the world, we talked to the Carmignac Prize committee to find out how we would carry out our work in the current context. We wanted to do something different, to set up a collaboration with Congolese photo journalists who could contribute with a global discourse around the pandemic in Congo but also around other relevant themes such as access to drinking water, electrification, the environment, the mining situation, politics, security and health. The project “Congo in conversation”, as the title of the project suggests, is a conversation between myself and contributors. Together, we select a topic, discuss it, share photos and write a paper that tells the local Congolese context but also the global one, to show what is happening in Congo during the pandemic and how it links it to the outside world. The idea is to show the rest of the world what is happening in Congo during the pandemic. 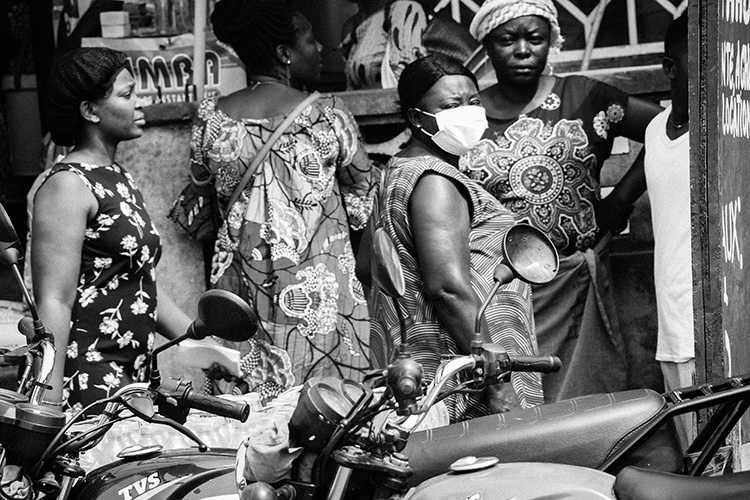 A street scene in Congo’s capital Kinshasa in mid-March, 2020. Congolese authorities closed schools and shut down major commercial activities to enforce social distancing in a country where many people weren’t taking precautions and didn’t believe the virus was a threat to them during the early days of the pandemic. Justin Makangara/Fondation Carmignac

You have spent a large part of your life witnessing conflicts in Africa and in the DRC. You have also lived in Congo for a few years, do you plan to return there to continue the work you started for “Congo in Conversation” ?

I have traveled extensively, and have worked all over the continent and in conflict zones. And now my attention is drawn to Congo again with “Congo in conversation”. I have been working in the Congo for twenty years. I was also based in Kinshasa from 2001 to 2003. And then I worked a lot in the East, being based in Kigali as a reporter on the Great Lakes, and I covered a lot of events in Eastern Congo. I know the history of the country and this allows me to give an account not only of the insecurity that has been going on in the country for the past twenty years, but also the positive side that is developing; this generation of young people who are improving the situation despite all difficulties. The angle of this project seems important to me: to show how the population and the communities are creating the means to move the country forward. Our contributors, journalists, are part of this young generation that is between twenty and thirty years old.
They represent the future potential of the country. Although there are many other important topics, especially this year which celebrates the sixtieth anniversary of the country’s independence, it is this hope for a better future that I wanted to share with this project.
Every year the Carmignac Prize puts together an exhibition around a subject. This year a book will be published with the work of the Congolese photographers who contributed to “Congo in conversation”.
There will also be an exhibition in Paris, France in November. I will return to the Congo in January 2021 to carry out my original project, my personal reportage on the Congo, which will make a second book and an exhibition at the end of 2021. The Carmignac Prize will allow the Congo to be under the spotlight for two years. 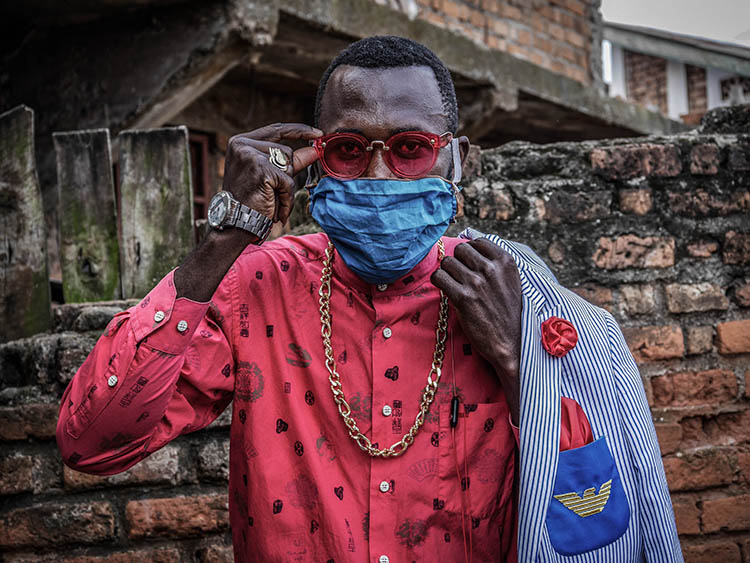 Anglebert Maurice Kakuja, 29, a Sapeur, or Congolese dandy, shows off his fashion sense while wearing a homemade mask in the eastern Congolese city of Bukavu this week. Sapeurs take their name from the acronym for their group: SAPE, meaning Société des Ambianceurs et des Personnes Élégantes, or “elegant persons who create ambience.” Raissa Karama Rwizibuka for Fondation Carmignac.