Cameroon, Foumban during the ritual of Nguon

The traditional ritual of the Bamoun Kingdom is one the most beautiful Celebrations of Cameroon. It is also a unifying moment for the people of Bamoun.

Every two years in November, the city of Foumban in western Cameroon is overrun by thousands of people wearing funny little coloured caps.
These hats, covered with sticks and bumps with no two alike, are a prerequisite for participating in Nguon, the great traditional festival of the Bamoun Kingdom. These ritual headdresses indicate the geographical location and social status of the man or woman who wears it. Formerly made of raffia, they were worn by the region’s chiefs. Nowadays, they are made of knitted wool and are adopted by all the inhabitants of the Great West.Everybody enjoys getting creative for the Nguon by adding their own personal touches in the form of cowrie shells, feathers and other trinkets. 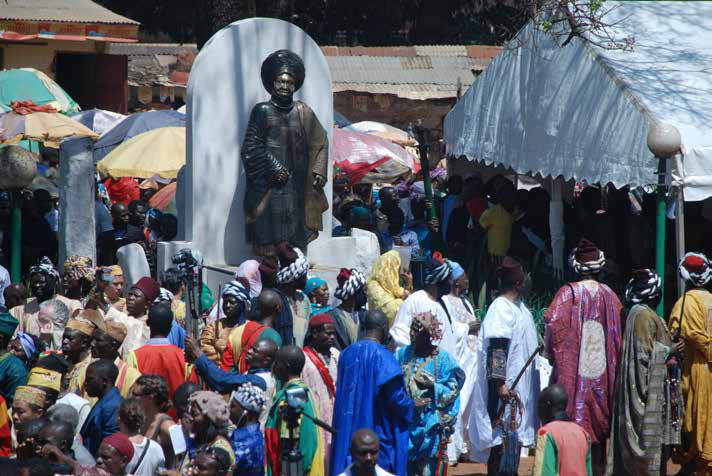 The party, to which everyone is invited, is not just any party. This is the 545th edition of Nguon, one of the oldest ceremonies of Cameroon, celebrated almost without interruption since 1394 by the nineteen sultans who succeeded to the throne of Bamouns in Foumban. This kingdom, which covers half of the Western Region with more than 800 000 citizens, is known for its strong cohesion and the richness of its history and traditions. 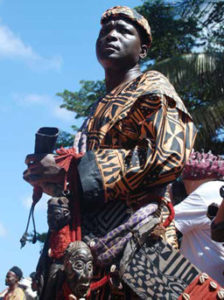 It is Ibrahim Njoya, the 17th Sultan (1876-1933) who has left the deepest impression in the dynasty’s history. He built the current Palace out of brick. He forged a religion inspired by both Islam and Christianity. He even invented a method of writing for his people. But Njoya’s creativity and independence fell foul of the French colonizers, and he was exiled at the end of his life. Nguon was banned in 1924 because the French did not trust an event over which they had mastered neither the rites nor the language.

The current Sultan, Ibrahim Mbombo Njoya, himself a grandson of Njoya, who restored Nguon when he ascended the throne in 1992. The young monarch regarded it as a duty to his illustrious ancestors. It was also a challenge, as the Nguon aims to highlight the judgment of the Sultan by his own people through public indictment where accusations and grievances are aired. If the judgment is very ritualized, it is said that the Sultan takes the accusation very seriously. Ritual or reality, every two years Nguon is definitively the great unifying moment of the Bamoun people. For outsiders, it is one of the most beautiful ceremonies in Cameroon.

Foumban is considered the city of arts in Cameroon. Visit the Sultan’s Palace and Museum, the Museum of Arts and Bamoun Traditions and the numerous artisans shops located at the exit of the palace.