10 reasons to go to Madagascar 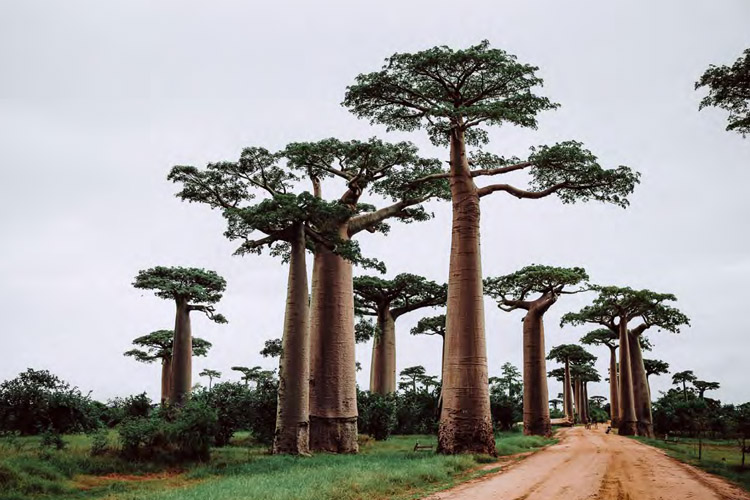 1 A nature and a fauna unique in the world 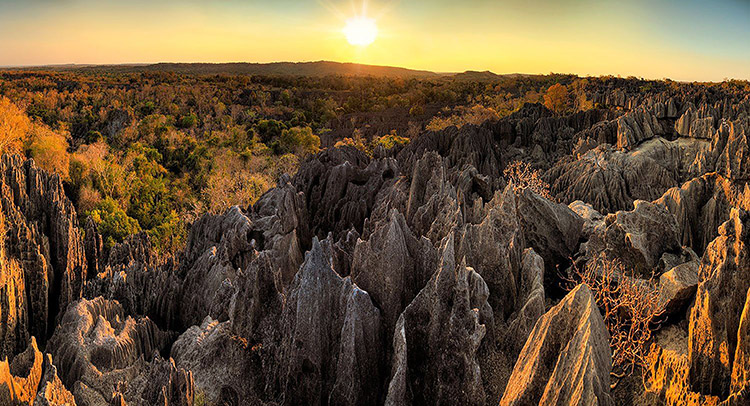 The exceptional diversity of baobabs
They are mainly found on the west coast of the island. Almost all baobabspecies on the planet can be seen on the island of Madagascar. The arid landscapes shaped by these impressive trees could inspire movie sets. Taking the baobab alley north of Morondava is a truly unique experience.

Andasibe-Mantadia National Park
Consisting of several reserves, it is located in the primary forest to the eastof the island. There you will discover the famous rainforest and its endemiclemurs, in particular the mythical Indri Indri and the distinctive cry itmakes to call its companions. Like the cry of an inconsolable woman, theyresound in the quiet reserve. Suddenly you can see their little round faces,their black, grey and white fur, thick and soft, and their shiny, fluffy tails.Their species is sadly threatened with extinction.

Tsingy De Bemaraha National Park
This is another Malagasy geological curiosity, with a landscape that isboth singular and magical. It is made up of very eroded limestone massifswith sharp peaks. The massif is cut by a powerful river which flows in itsmiddle: the Manambolo. Take the time to walk along the via ferrata thatallow you to discover the interior of the massif and admire the singularflora that has managed to adapt to this limestone environment.

2 Vast expanses of sea and sand 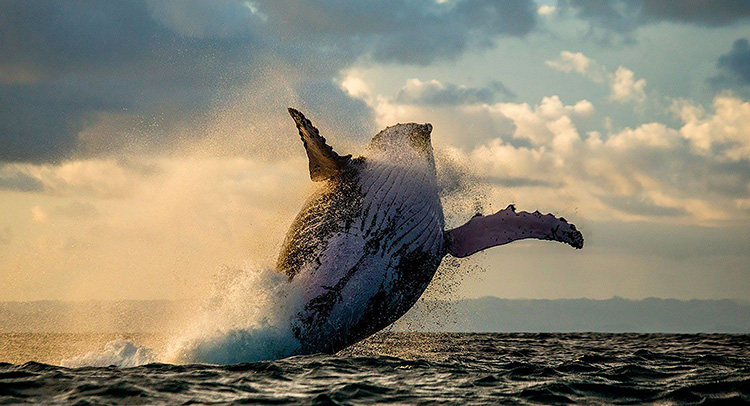 The island’s coastline is about 5000 kilometres long. Malagasy watersaccommodate a myriad of recreational activities: scuba diving, windsurfing,kitesurfing, sea kayaking, surfing… ou can also sail from island to island. From July to September, the ballet and songs of humpback whales is anunforgettable spectacle.

3 Dive into another world 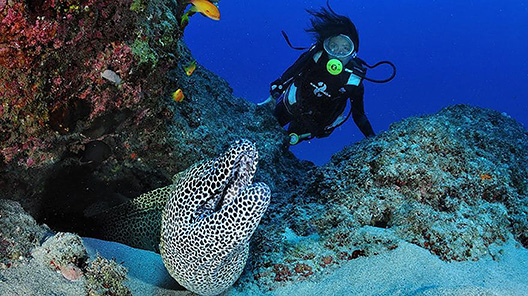 Located in the Indian OceanDive into another world. Located in the Indian Oceanbetween Africa and Asia, Madagascar offers a wealth of endemic andrich biodiversity, making it an ideal place for discovery and adventure.There are many perfect spots for your next dives􀊥 The most importantones are in the Nosy Be region which offers high quality scuba diving sitesto swim among turtles, sting rays or manta rays. The underwater fauna isimpressive here, the undeniable star being the whale shark whose largestcolonies in the world can be seen around the island of Sainte-Marie oroff Nosy Be. The locals are committed to protecting their aquatic environmentby adopting an ethical and responsible way of life. Madagascaris also a paradise for all sport fishing enthusiasts. If you like water andthrills, you certainly won’t have time to get bored ! 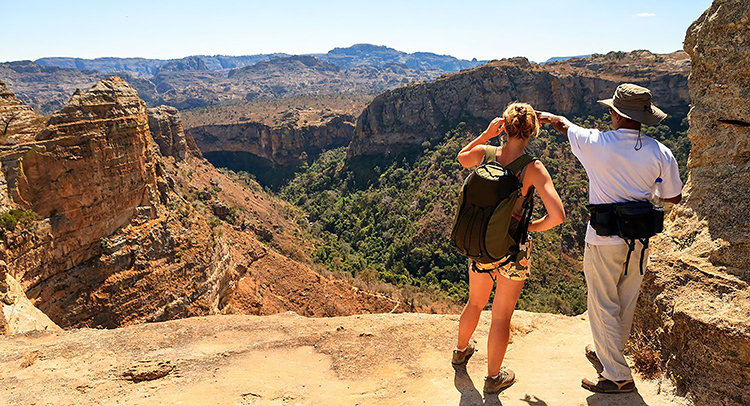 This form of traditional agriculture datesLandscapes of rice paddies. This form of traditional agriculture datesback to ancient times. The settlement of the island was largely the result of Asian immigration.Rice is a tropical plant that grows best in hot and humid places. Rice cultivationhas developed especially on terraces. It can still be found in most dishes today andis the essential food of the Malagasy people. Its cultivation remains the main economicactivity on the island and it is one of the main sources of income for many inhabitants.Rice agriculture occupies the majority of the country’s cultivated areas and the differentvarieties of rice are harvested several times a year. Rice paddies are an integral part ofMadagascar’s landscape and the spectacle of these endless green expanses with geometriclines is stunningly beautiful. The Betsileo region in particular, considered the ricegranary of the island, is famous for its incredible rice terraces in the middle of whichstands out a group of houses with colourful walls. A sight not to be missed.

6 The diversity of the malagasy people 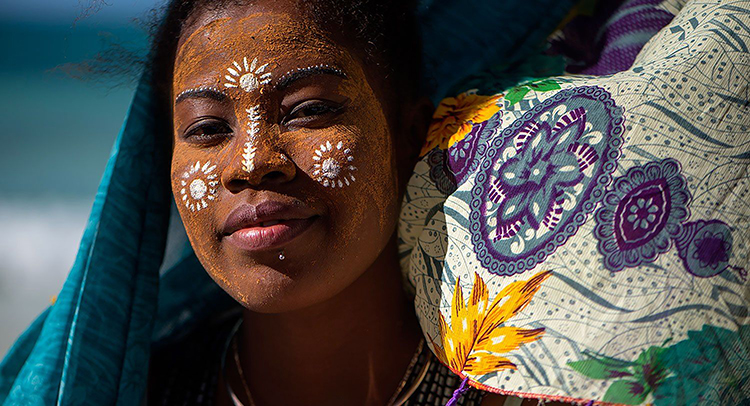 The diversity of the malagasy peopleIt is a mystery country, somewhere between Africa andAsia, intriguing and seductive. Reflecting a rich anddiverse culture, Malagasy people speak a common languagethat is shared by eighteen ethnic groups. Thesegroups are distinguished by their dialect, hairstyle, clothing,habitat, art, folklore, culinary specialities, religionand tradition. This mosaic of peoples and cultureshas also developed a real art of living together. TheMalagasy come from all over the Indian Ocean, Africa,Europe, Asia… This patchwork of faces, colours, musicand perfumes makes up a fascinating whole. The kindnessand hospitality of the Malagasy people should alsobe underlined. If you are interested in culture and traditions,you will be delighted. 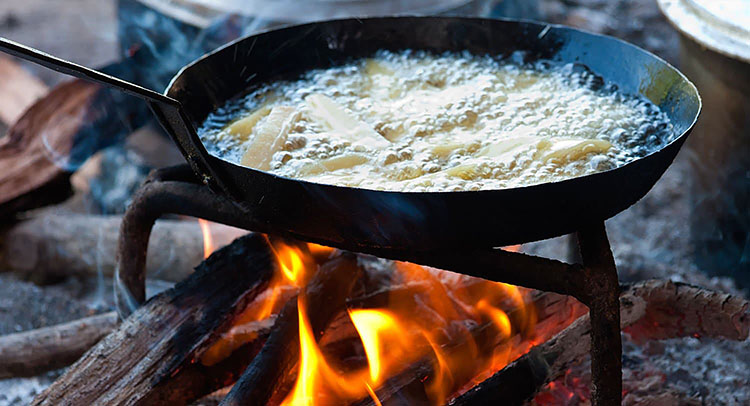 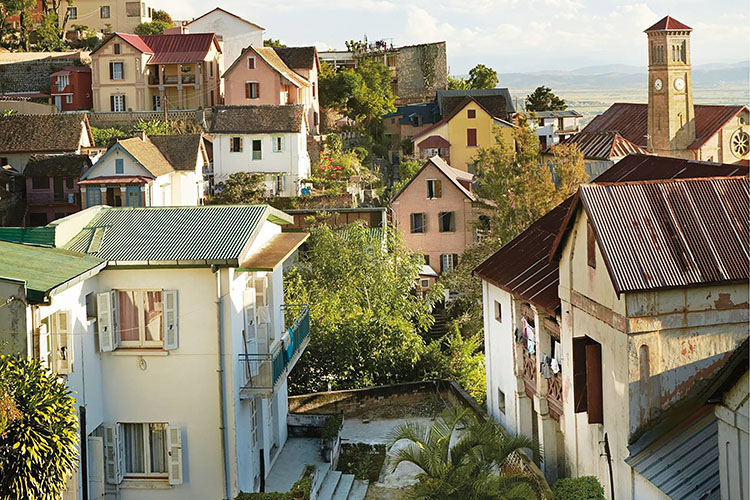 Antananarivo was erected on a hill that rises1248 metres above rice paddies. Also knownas Antananarivo or “the city of miles”, it isthe capital of the country, the economic andadministrative lung of the island, a traffic-clogged city with fascinating historicaldetails. No one can remain indifferent to thecity’s contrasts. Indeed, although modernbuildings and apartment blocks are increasinglyspringing in the heart of Antananarivo,traditional residences still find theirway in the surroundings of the capital. DiscoveringAntananarivo is undoubtedly a fascinatingexperience.The upper town of Antananarivo is representativeof Madagascar’s history. Walk aroundwhat will soon be classified a UNESCO WorldHeritage Site and soak up the soft atmospherethat emanates from this district. Sittingon one of the highest hills of the city ofAntananarivo, the Manjakamiadana palaceoffers an unparalleled panoramic view ofthe surroundings. The Manjakamiadanarova or Queen’s Palace is the former officialresidence of the rulers of Madagascar in the19th century. Built by Jean Laborde in 1839for Queen Ranavalona 1st, the building wasonly a wooden residence. Of an exceptionaldimension for the time, the constructionrests on a single central pillar of 39 metres.It is said that the transport of a giant treebrought back from the forests of the East forthe purpose of the project caused the death ofseveral hundred people. It was in 1869 thatthe English architect Cameron added a layerstone to cover the structure. It has lost none ofits charm despite the fire that ravaged part ofits fa􀂕ade in November 1995. In addition to itshistorical value, this palace is an exceptionaltourist site.

10 A destination for all budgets

A destination for all budgetsRegardless of your holiday budget, Madagascarwill be able to meet your expectations. For small budgets, Madagascar offers anarray of hotels at reasonable prices. Shouldyou prefer comfort and luxury, there aremany top-of-the-range establishmentslocated in exceptional places. You can stay bythe sea in 3 or 4-star hotels with spas equippedwith sauna, hammam, jacuzzi… Shouldyou wish to discover the island’s fauna andflora, you will find numerous high standardhotels near the National Parks. Upon yourreturn from your excursion, you will be ableto take a dip in your hotel’s swimming poolwhile listening to the sounds of the forest…